Any wireless engineer who has spent time completing AP-on-a-stick (APoS) surveys has probably used the Terrawave MIMO 802.3af POE battery. It was a heavy lead-acid battery in a metal case, which promised six hours of use before needing a recharge. Most days it did deliver 6 hours when powering an AP with a single radio enabled. However, I often found that if you ran both AP radios, it would regularly give you less; usually running right around 5 hours with a charge during a meal break.

Did I mention it was heavy? Travel through airports and the TSA was a lot of fun too!

Now, Ventev has a new battery, the VenVolt. It’s sleek, orange, and much lighter. The VenVolt has a bunch of new features which make this an essential addition to any wireless engineer’s toolkit. 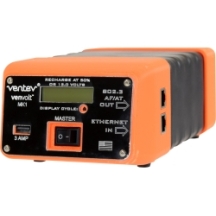 There are lots of “little” updates that should be mentioned as well:

One final note. The VenVolt is labeled “MK1”. To me, this is a suggestion that updates will come in the future, rather than the “one-and-done” approach of the Terrawave Battery. While I’m excited to see what may come in MK2, this is an excellent upgrade and a definite requirement for anyone who spends time doing APoS surveys.

There was an excellent session at WLPC, where Ventev employees Dennis Burrell and Mike Parry, along with Sam Clements discussed the development process for the VenVolt. It’s worth watching:

Ventev Infrastructure supplied me with a VenVolt for testing and provided me the ability to give feedback. All written content provided here is my personal opinion, and has not been manipulated in any way by Ventev. I appreciate all companies who welcome constructive feedback!